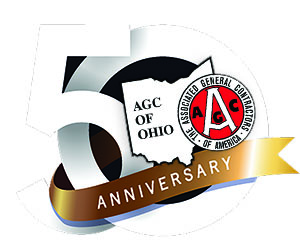 On March 9, 1970, three visionaries brought together Ohio’s fragmented building industry groups to form what we now know as the AGC of Ohio. Originally named the Ohio Building Chapter (so as not confuse between the Ohio Contractors Association (a-chartered AGC highway chapter). Thomas C. Fitzpatrick (Columbus), Grant Hesser (Cincinnati), and Bill Ferris (Cleveland) met with AGC of America representatives to sign the Charter that created the AGC Chapter.

For many years, individual cities throughout Ohio had established building associations primarily for the purpose of collective bargaining. During this early period, legislative activity and governmental impact upon construction companies was growing by leaps and bounds. These three individuals and their respective organizations bound together to represent the vertical building industry in Ohio’s halls of government.

Back in the 70’s the Ohio Building Chapter struggled. Far from the organization it is today, members were scarce, and funding was always difficult. Convincing the independent building groups around Ohio to affiliate was difficult in itself. Necessity eventually won out as all major city building organizations affiliated with the Ohio Building Chapter (OBC). The OBC name was dropped in the late 1980’s and became formally known as the AGC of Ohio.

Over the past 50 years AGC of Ohio has established itself as a premier construction association in Ohio’s Legislature and corridors of administrative state government agencies. In this issue, please pay particular attention to the listed long-term members. Through good years and lien years, many companies maintained an active status in the association. This was recognition that AGC’s role in Ohio had become vital to the interests of the Building Industry in Ohio.